Indian Country News Log
☰
Welcome to NABC News! This is an experimental service. We will be providing synopses of iCountry stories from the world press. You can be an NABC reporter: More information.
Ireland Sculpture Recalls Choctaw Generosity
Oct 19, 2020 - Miscellaneous 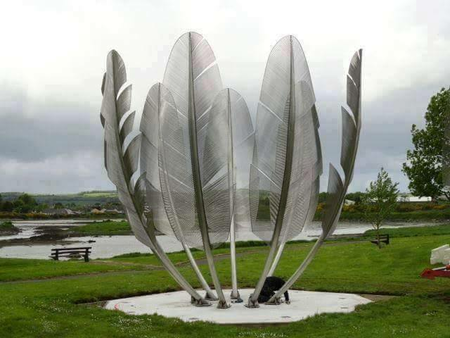 This beautiful sculpture Kindred Spirits in Midleton, Co. Cork created by Cork artist Alex Pentek was erected to commemorate the generosity of a Native American tribe towards the people of Ireland at the height of the Great Famine.

On Native American Day we remember the generosity of The Choctaw nation who raised $170 in 1847 which would now be worth tens of thousands of dollars to aid those starving in Ireland during the Great Famine. 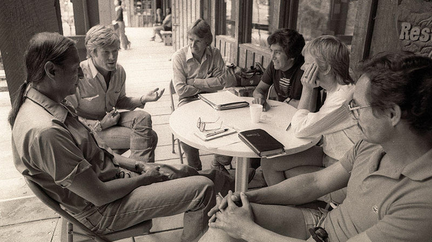 There are many great stories to be told by Indigenous artists, and Sundance Institute and its partners are committed to this work. The launching of the Sundance Institute Short Documentary Fund focused on Native and Indigenous Storytellers is the latest effort to support the voices of Indigenous filmmakers. With the support of the John D. and Catherine T. MacArthur Foundation, and the partnership of the Guardian, the Fund will support up to five filmmaking teams with a Native or Indigenous creative in a key position with a $25,000 grant to make a new non-fiction short film. The shorts will have the opportunity to launch on the Guardian’s documentary platform. Applications will be accepted until May 14th, and are available (click the link below the article).

The Fund is specifically interested in journalistic approaches to accessible and urgent stories of topical, contemporary issues that have not been told. And, stories that can be effectively told in a short format (15-30 minutes). There are more rules and eligibility requirements within the application including an application checklist and FAQ’s. Have a look!

Link | 0 Comments
Concern rises on reservations regarding COVID-19
Apr 4, 2020 - Miscellaneous
Jovelle Tamayo reports for The Washington Post: Conditions in Indian Country are ripe for a rapid spread of the coronavirus. Rate of infection among Navajos is a major concern.

The Lummi Tribal Health Center in Washington state is bracing for the deadly coronavirus.

They hastily piled all the dumbbells and treadmills in the back of a gym to make room for 23 extra hospital beds. The beds aren’t needed yet, but on a reservation where residents suffer high rates of diseases that exist throughout Indian Country, the Lummi Tribal Health Clinic is taking every precaution to prepare for the deadly coronavirus.

Two thousand miles away at the Cherokee Nation in Oklahoma, where 11 people have tested positive for the virus as of Friday and one has died, Chief Chuck Hoskin Jr. said: “We’re preparing for the worst." Health workers plan to move hospital beds into a nearby university and a job-training facility shuttered because of the pandemic. “This is the worse public health crisis we’ve had in a generation.”

"We could get wiped out": American Indians have the highest rates of diseases that make covid-19 more lethal.

The tribe made the purchase — which includes the surrounding land and nearby hotel —from the Muckleshoot Tribe for $125 million.

The falls are sacred to the Snoqualmie people, and their traditional burial site is right above the falls.

Read more about it

Link | 0 Comments
New edition of key reference volume available
Dec 12, 2010 - Miscellaneous
Todd Publications has announced the release of the 16th edition of its respected Reference Encyclopedia of the American Indian.

NWIC’s goal for the evening is to raise $250,000 in support of the college’s cultural arts and education and to enhance our relations and understanding within the region. Our vision for education at NWIC is based in deeply held beliefs about relationships and stewardship. Tickets to the event are $250.

The event, co-hosted by David and Jonathan Syre (Trillium Corp), will include a pre-event reception, gourmet fare and a live and silent auction of Coast Salish cultural arts and experiences, including a tour of a renowned local master carver’s studio (Felix Solomon, who has artwork displayed at the Whatcom County Museum as well as private collections).

The college is currently seeking table captains, table sponsors, and ticket sales. We are also seeking artists who wish to donate art for the live or silent auction.
Link | 0 Comments
Tribal self-governance applications due
Jan 22, 2009 - Miscellaneous
The U.S. Regulatory Information Bulletin features a Department of Interior notice relating to the deadline for Indian tribes/consortia to submit completed applications to the Office of Self-Governance (OSG) to begin participation in the tribal self-governance program in fiscal year 2010 or calendar year 2010. Find this and other bulletins at http://www.narf.org/nill/bulletins/ilb.htm.

Read more about it

Only tribes who maintain a legal relationship to the U.S. government through binding treaties, acts of Congress, executive orders, etc., are officially "recognized" by the federal government. Once "recognized" a tribe has a legal relationship with the United States. There are currently more than 550 federally recognized tribes in the United States, including some 200 village groups in Alaska. See the Native American Rights Fund web site for more information.

Link | 0 Comments
State of the 'Indian' Nations
Feb 28, 2008 - Miscellaneous
A <i>State of the Indian Nations</i> address given by President Joe Garcia of the National Congress of American Indians has been posted on the organization's web site. Th speech was titled: "Through the Eyes of Our Children: Hope for a Restored Native America" and is the 6th annual address. Read the text at the NCAI site.

Link | 0 Comments
Wind River Legal Code On Line
Dec 21, 2007 - Miscellaneous
The Native American Law Library recently obtained permission to post The Law and Order Code of the Shoshone and Arapaho Tribes of the Wind River Indian Reservation, Wyoming. The Code is one of more than 100 tribal legal documents available at the Library's web site.

Link | 0 Comments
Indian Law Appearing in US States' Bar Exams
Dec 4, 2007 - Miscellaneous
A sign of the growing importance of Indian law is that the New Mexico, South Dakota and Washington State Bar Associations have decided to add a question on Indian law on their state bar exams. This article, set out in two parts, and originally published in the Colorado Lawyer, attempts to provide some practical tips for the Indian law researcher. Part I focuses on federal Indian law research. Although hundreds of pages could be written on researching federal Indian law, this article focuses on providing basic tips related to common questions received by the National Indian Law Library (“ NILL” ) and the best sources of information to answer those questions.

(Tour the linked site and its own links for a wealth of leads on Indian law and jurisprudence. -Ed.)

Link | 0 Comments
Marysville, WA, and Tulalip Tribe Pledge Unity
May 9, 2007 - Miscellaneous
Bill Sheets reports in the Everett (WA) Herald that Tulalip Tribes and the city of Marysville have pledged greater cooperation between the two jurisdictions. Transportation and economic development, in particular, are two subjects in which the tribe and city can work more effectively together, officials said.

The $6.4 million road project is part of a $54.2 million plan to improve traffic flow in a particularly congested part of Snohomish County. Marysville is about 35 miles north of Seattle.

The accord was inspired in part by past development, in which adjacent projects of the tribe or the city were poorly coordinated.

"A change in a county code that Snohomish County officials say is a 'housekeeping amendment' could be a harbinger of a future shift in the county's policies toward Indian tribes, county planners said. The Snohomish County Council voted last week to create a 30-day deadline for the tribes to respond when archaeological features are found in the course of development when apparent tribal artifacts or gravesites are found. Under the county's old code, the tribes were allowed to take as long as they wished to advise the county when remains or artifacts were found.

County officials assert that the open-ended response time prevents orderly functioning of government. Some tribal officials worry that they won't be able to meet the requirement.

The Sauk Suiattle, Stillaguamish and Tulalip tribes were among those that were party to the Treaty of Point Elliott in 1855, which surrendered land that makes up about a fifth of what is now Washington to the federal government. Those tribes are now working together in a legal suit known as the Habitat Claim to assert sovereignty over land and resources they say are integral to their culture.

Read the original article at the link below.